With the nation’s attention currently focused on the State of Georgia, it’s only appropriate for us to feature the City of Atlanta in this week’s ESG case study. As a matter of fact, “The Chicago of the South” recently came to market with a $369.38 million G.O. Series 2022A-1 issue, which also carried a “Social Bonds” label from a relative newcomer to the tax-exempt market, Sustainalytics.

Strong Financials, Except for the Pension & OPEB Burden

As usual, we start with a quick review of the City’s financial trends, as displayed on our MuniCREDIT Online application. As shown in Table 1, Atlanta comes through as a fiscally well-managed city, well in line with its Aa1/AA+ rating by Moody’s and Fitch, respectively. Its direct debt burden is relatively light compared to its tax base and the city has accumulated a sizeable General Fund (GF) balance equal to about 30% of GF Revenues. 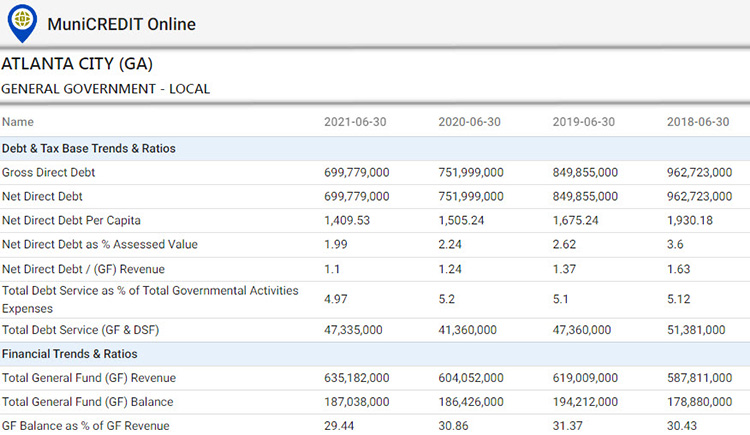 The only fly in the ointment here is the City’s significant Net Pension and OPEB Liabilities, an issue which was flagged by the rating agencies: the combined Net Pension and OPEB Liabilities stood at $2.1 billion in FY2021, equal to 71% of the total liabilities for all Governmental Activities Funds. This also translates to about $4,238 per city resident. The FY2021 funded ratios for its General Employees, Firefighters and Police Officers’ Retirement Funds stood at 68.63%, 72.31%, and 75.44%, respectively (note: DPC DATA collects comprehensive pension fund data for all States, local governments, and school districts).

From a socio-economic standpoint, much like Chicago, Atlanta continues to experience population losses, as shown in Table 2.

Even though its fiscal strength far exceeds Chicago, Atlanta’s “E” profile is fairly similar to the Windy City’s, based on the “Environmental” and “Social” Risk scores developed by our partner Spatial Risk Systems (SRS), as shown below.

Atlanta’s Climate Impact score, which takes into account both the probability of occurrence of climate events and their estimated dollar impact, is just average (score of 5), compared to other cities in Georgia and around the country. As can be expected from an old industrial urban center, however, its Environmental Risk score falls into the top percentile of all cities, both statewide and nationwide.

SRS also compiles a couple of “social scores” designed only to measure a community’s ability to withstand and recover from climate and/or environmental disasters. Atlanta scores surprisingly well on both fronts, except for a score of “7” on the Community Resilience score.

The City of Atlanta appears to have ample resources at its disposal to manage the potential transition cost to a Net Zero economy by 2035, with scores of either “1” or “2” on the ratios comparing its estimated transition liability to its tax base and operating budget, as seen below:

Not surprisingly, we could not find any disclosure in the Official Statement about any ESG-related risk, except for a brief statement about cybersecurity.

Instead of paying the usual lip service to the SDG checklist, the City appears committed to a more disciplined approach to Social Bond issuance, from segregated use of proceeds to reporting on key performance metrics on an annual basis. The Second-Party opinion mentions that “through its operating departments, the Office of Enterprise Risk Management and district council members, the City carries out an environmental and social risk review based on internal frameworks for environmental and social risk management (…).”

Needless to say, this is an approach we’ve been advocating for all state and local government entities. The City of Atlanta certainly deserves recognition for taking a step in the right direction.

Note: for more details on our MuniCREDIT Solutions, which covers over 24,000 municipal obligors across all major sectors, and on our MuniESG scores, including details on the 18 sub-components of the Climate Impact Score (hurricanes, tornadoes, wildfire etc.), please contact us at sales@dpcdata.com.

Disclaimer: This report is for informational purposes only and is not intended as an offer or solicitation with respect to the purchase and sale of any security. Although the information contained in this report has been obtained from sources we deem reliable, we do not guarantee its accuracy, and such information may be incomplete or condensed. Investors should obtain and read the official statements related to the securities discussed. All opinions are only valid as of the report date and are subject to change without notice.

See all
MuniESG Insights | City of Madison, WI: An ESG Story Waiting To Be Told