On August 11, the City of Chicago held its first live Investors Conference since the start of the pandemic. A team of senior officials, led by CFO Jennie Huang Bennett, used the opportunity to highlight recent improvements in the City’s financials as the nation’s third largest metropolis emerges from a global health crisis. Most notably, the City also showed investors its willingness to embrace and address its rather daunting ESG challenges.

In her presentation, CFO Huang Bennett touted the following key financial accomplishments, among others: (1) achieving the second smallest operating deficit in 16 years; (2) maintaining the highest rainy-day reserves in 13 years; and (3) increasing the funding ratio on all four of its pension plans for the first time in 15 years.

Users of our MuniCREDIT Online application can quickly confirm the City’s improving fiscal picture, as shown in Table 1. 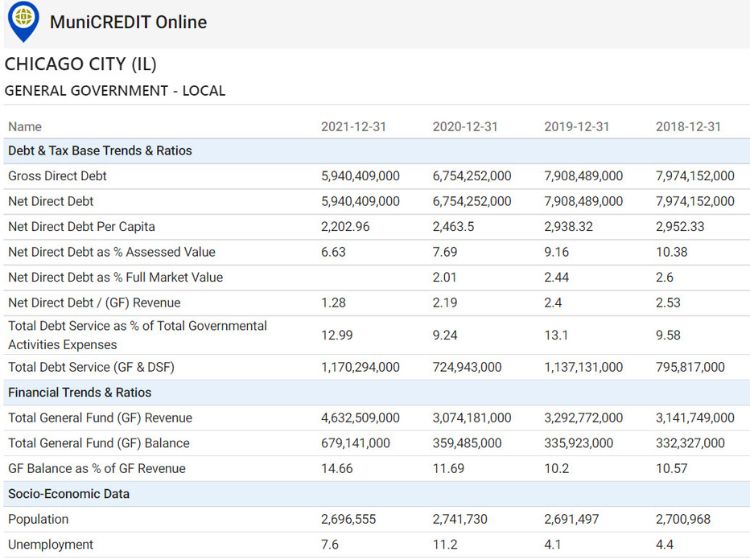 The improvement in FY 2020 and FY2021 may not be as clear-cut as the City would have us believe, since much of it was predicated on the massive American Rescue Plan aid from the Federal government. The City is trying to leverage the federal dollars toward achieving its ambitious infrastructure and economic development agenda.

However, Table 1 also shows that Total Debt Service as a Percentage of Total Governmental Activities Expenses remained relatively high in FY2021 at just under 13%, actually up from 9.24% in FY2020.

The pension funding picture is also mixed. The City’s more aggressive funding policy is a step in the right direction, but from a rather low base. Our data show that the funding ratios for the City’s two largest retirement plans, the Municipal Employees’ Plan and the Policemen’s Plan, remain mired at just below the 24% mark.

The City has also been paying just over 50% of the Plans’ actuarially determined contributions, so much more remains to be done. One would hope that a dedicated new funding source for the pension liabilities can be identified, perhaps revenues from the recently approved Bally’s downtown casino (Note: regarding pension data, DPC Data collects 10 key data points for all individual State and local retirement systems, all mapped to the correct obligors).

Almost by definition, any large, densely populated urban area like Chicago would face many ESG-related issues. This is confirmed by the “Environmental” and “Social” Risk scores developed by our partner Spatial Risk Systems (“SRS”), as shown in Table 2. 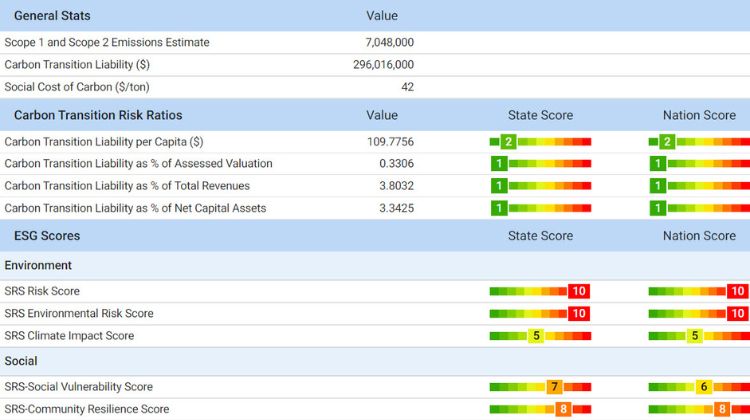 Rising to the challenge

As mentioned before, the City appears to be recognizing and addressing its ESG challenges, particularly on the “Social” front, starting with its first ESG labeled bond issue of about $150 million in the Fall. 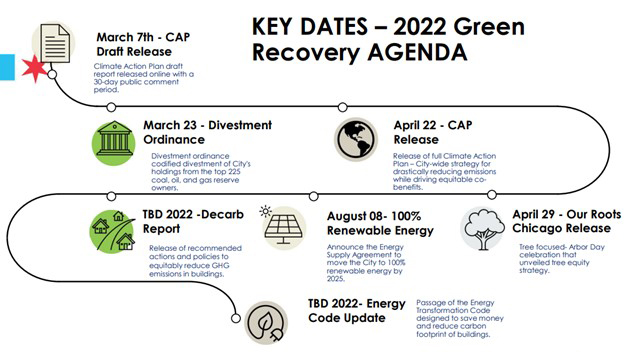 Chicago is a great example of how an analytical approach combining both traditional financial analysis and ESG assessment can yield (pun intended) a more complete picture of this great city’s fiscal outlook. We believe bond investors will, over time, reward issuers who display a willingness to acknowledge, disclose and address their ESG challenges.

Note: for more details on our MuniCREDIT Solutions, which covers over 24,000 municipal obligors across all major sectors, and on our MuniESG scores, including details on the 18 sub-components of the Climate Impact Score (hurricanes, tornadoes, wildfire, etc.), please contact us at sales@dpcdata.com.

Disclaimer: This report is for informational purposes only and is not intended as an offer or solicitation with respect to the purchase and sale of any security. Although the information contained in this report has been obtained from sources we deem reliable, we do not guarantee its accuracy, and such information may be incomplete or condensed. Investors should obtain and read the official statements related to the securities discussed. All opinions are only valid as of the report date and are subject to change without notice

In this week’s case study, we look at how Health First navigated through the pandemic environment of the past 3 years.

We look at the financial and ESG trends facing Weld County Re-4 and spot some challenges for this oil and gas dependent entity.

2022 was either a year to forget or a year to remember for a very long time, depending on your perspective. Triet Nguyen reviews the ups and downs of 2022 and looks ahead to 2023.

MuniESG Insights | City of Madison, WI: An ESG Story Waiting To Be Told