Happy New Year. When it comes to Muni ESG, covering the bi-coastal states and cities can sometimes feel like preaching to the choir. So this week we decided to pick a city in the Deep South, where skepticism about climate change runs deep, and review its climate risk exposure.

Let’s talk about the City of Tuscaloosa, AL, which recently came to market with a $62.885 million G.O. Warrants issue (Series 2022-C). As expected, its Official Statement made no direct reference to any ESG issues, except for a couple of paragraphs in the “Warrantholder Risks” section regarding “cybersecurity” and, rather euphemistically, “Inclement Weather” (!)

As home to the flagship campus of the University of Alabama, Tuscaloosa displays a very strong fiscal profile, as evidenced by its AAA bond rating from Fitch and Aa1 rating from Moody’s. That said, both rating agencies have assigned a “negative outlook” to the City’s Warrants, citing rising debt levels and the need for an aggressive capital spending program going forward.

A quick look-up of Tuscaloosa in our web-based application, MuniCREDIT Online, confirms the deteriorating debt ratio trends. This is shown in Table 1:

Back in 2020, the Yale Program on Climate Change Communication ran a survey asking residents of major metropolitan areas around the country how they felt about the reality of climate change. As expected, the residents of Tuscaloosa displayed a higher level of skepticism (some might say denial) about global warming, as shown in Table 2. 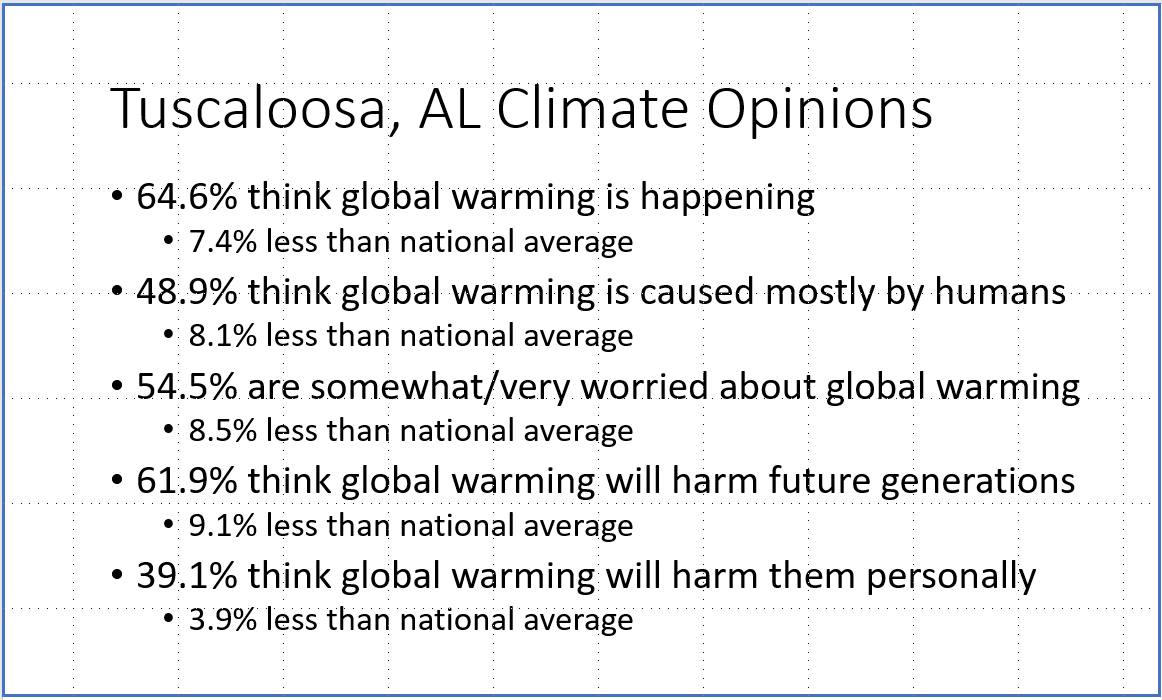 It’s fair to assume that local skepticism about climate change would run even higher, were it not for the city’s large college student population. In fact, the same Yale survey names the city of Cullman, AL, located just 100 miles north of Tuscaloosa, as the metro area where the fewest residents think global warming is happening, compared to all the other metro areas included in the nationwide survey.

Physical Risk Exposure: All About Twisters

Whether residents of Tuscaloosa choose to believe it or not, the City does have significant environmental and climate risk exposure. Its Environmental Risk Score, as compiled by our partner at Spatial Risk Systems (SRS), is a “10” (highest decile) and its Climate Impact Score is a “7” (seventh highest decile).

Tuscaloosa’s unfavorable Climate Impact Score is driven primarily by the Tornado Risk sub-component, where it scores an “8” versus other cities in the country. In fact, back in April 2011, a violent long track EF-4 tornado destroyed about 12% of the city. This caused a reported $1.5 billion of property damage in Tuscaloosa and Birmingham.

As a mitigating factor, the City’s Social Vulnerability and Community Resilience Scores are moderate, showing a strong ability to withstand and rebound from any natural disaster.

Physical risk aside, Tuscaloosa is well-positioned to manage its potential carbon transition liability, assuming the city ever gets onboard the “net zero” train. It ranks in the top two deciles (scores of “1” or “2”) versus other cities within the state and around the country, as shown in Table 4.

Tuscaloosa’s climate risk exposure goes well beyond mere “inclement weather” and merits better disclosure in bond offering documents. That said, this college town’s strong fiscal position and favorable socio-economic indicators should provide enough of a cushion against future climate events. Even if most city residents don’t quite believe in the threat of climate change, those who do can still look to the University of Alabama for leadership on local sustainability efforts.

Note: for more details on our MuniCREDIT Solutions, which covers over 24,000 municipal obligors across all major sectors, and on our MuniESG scores, including details on the 18 sub-components of the Climate Impact Score (hurricanes, tornadoes, wildfire, etc.), please contact us at sales@dpcdata.com.

Disclaimer: This report is for informational purposes only and is not intended as an offer or solicitation with respect to the purchase and sale of any security. Although the information contained in this report has been obtained from sources we deem reliable, we do not guarantee its accuracy, and such information may be incomplete or condensed. Investors should obtain and read the official statements related to the securities discussed. All opinions are only valid as of the report date and are subject to change without notice

In this week’s case study, we look at how Health First navigated through the pandemic environment of the past 3 years.

We look at the financial and ESG trends facing Weld County Re-4 and spot some challenges for this oil and gas dependent entity.

2022 was either a year to forget or a year to remember for a very long time, depending on your perspective. Triet Nguyen reviews the ups and downs of 2022 and looks ahead to 2023.

MuniESG Insights | City of Madison, WI: An ESG Story Waiting To Be Told